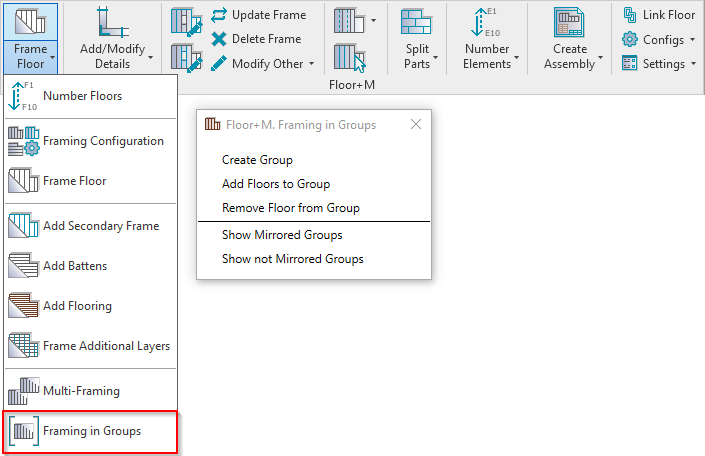 Framing in Groups – features for framing floors in groups.

Note: please make changes to frames in groups, which are not mirrored. 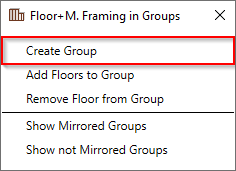 Create Group – creates group from selected floors. Frames in floors will be automatically included in group.

Note: make changes to frames in groups, which are not mirrored.

The group can be copied or mirrored multiple times in the project. You can now frame floors in the group with Frame Floor and all groups will be updated. 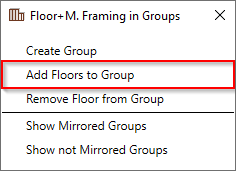 Usually used after making changes to frame. In order to modify frame, remove floor from group by selecting Remove Floor from Group → make changes to frame → Add Floors to Group → select a group with modified frame.

Result: selected floor is added to the group together with a frame: 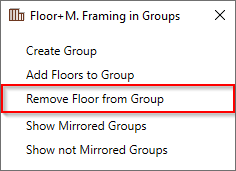 Remove Floor from Group – removes floor together with frame from selected group. Usually used before making modifications to frame.

Example, let's modify one frame. First, remove it from group with Remove Floor from Group:

Now floor with frame is removed from the group. You can modify it using Modify Frame, or other modification features:

The frame is modified:

Add floor to the group with Add Floors to Group: 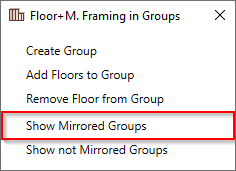 Show Mirrored Groups – selects mirrored groups, so you can see where they are. This informs you that you cannot modify frames in these groups. Find group which is not mirrored and make changes to it. Mirrored groups will be automatically updated.

Select any group and the function will show the ones which were mirrored: 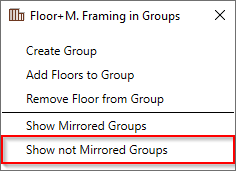 Show not Mirrored Groups – selects not mirrored groups, so you can see where they are. This informs you that you can modify frames in these groups.

Select any group and the function will show the ones which were not mirrored. The frames in such groups can be modified: